May 18, 2008 - After a quick lunch at the Legazpi Bus Terminal, we rode a van to Donsol for roughly 1 and a half hours. We got there by 2 in the afternoon. Donsol is, by far, the farthest I’ve gone in .

I am really happy on how tourist-friendly the town of is. Most of the food remains to be close to the prices in , sometimes a lot cheaper (particularly in their seafood). Tricycles don’t trick tourist by charging higher than the normal fare. Even the tourism office are friendly to tourist (duh, it's their job.LOL).They helped us find accommodation and people who would join in our whale shark boat. 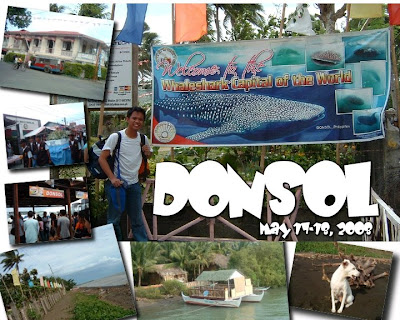 Anyway, we headed down to the Donsol Butanding Information Office to get a boat for the whale shark watching, but we were told to wait the next day since the sea was too rough. We instead went directly to our place, Amor Farm Beach Resort. It was a nice resort since we are the only one of two guests in that place (our group and a group of 5 brits). The feeling of being pampered and having the beach all by yourself is worth it.It was also quite affordable.

After a quick nap, we headed to to see some fireflies. For P1250 a boat, you’ll get a two hour river cruise. It was relatively inexpensive since we were able to share it with a group of 3 Lolas (“Gorgeous Lolas” from now on) bringing the cost to P200. The night was illuminated because of the full moon and it was rather early at night (around 7PM), so the fireflies were not visible from the boat. You have to go near a tree and shake it. I was not disappointed though, since the cruise was relaxing.

We woke up early next day for our whale shark watching. By 6:30AM we were already at the tourism office, we were again joined by the Gorgeous Lolas (Tita Coney, Tita Helen and Tita Cely) and aBritish backpacker, Nathan, whom my tita picked up from the town center that morning.

We waited for almost four hours before we had our first sighting. Imagine, 6-7 boats swirling around Donsol sea without any sighting.

OK, after four hours of waiting, our butanding guide finally spotted one So we were alerted by our guide for a dive. We were divided into two groups, one group will stay at the boat, then the other one goes to the water. Then, when a butanding goes again, they’ll be the ones who will be allowed to dive. 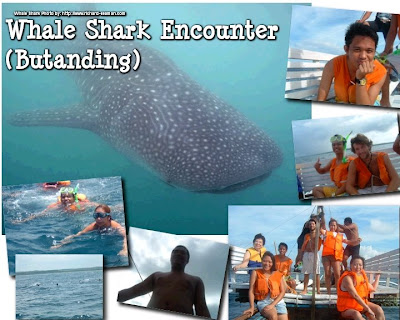 I went on the first dive. I managed to get a peek of the whale shark, roughly 1-2 seconds before it dived down. The sea was rough and because of excitement, I wasn’t able to follow to it further, but hey 1-2 seconds of whale shark interaction was well deserved. As I got back to the boat, there was a second sighting of a whale shark. The second group was lucky since they were able to see the whale shark for a longer period time. It was disappointing not going down the water the second time around and be able to see it longer. If only I have broken the rules, I would have seen it again. Why did I follow the rules?!?! Anyway, no regrets. It was still worth it.

Hahaha, as we went back to the pier, I left a little souvenir of Tapsilog (my breakfast) to the whale sharks (in short, I was seasick). Remember not to take heavy breakfast before going on rough sea unless you want to cut your trip short.

After the butanding interaction, we headed back to the resort to change and have lunch. By 2PM, we already checked out of the resort then took a trike to the town center. Let me just say that it was not the best time to get back to Legaspi since all vans were out because of the Donsol town fiesta. So we were forced to ride a jeep to Daraga, Albay (next town of ). Beeing adventurous and the seemingly big crowd wanting to get out of Donsol, I was forced to ride at the top of a jeep. Honestly, it was scary sitting only a small area while the jeep kept on speeding up especially on those sharp turn. I think that made my skin bad since I was under the sun for 2 hours.

In the end, Donsol remains to be an image of rural . Apart from occasional sightings of foreigners, you can see that tourism hasn’t change the town much like overcommercialized Boracay and Puerto Galera. It remains to be a small town still filled with ricefields, trees and relatively quiet resorts. That’s the reason I think why the whale sharks visit Donsol every year.

Well, as for the whale sharks, I promised them (?) that I’ll go back to Donsol soon (April) . Hopefully by then, I’ll see more of them and on a longer time. Now, I need to practice to swim.

Posted by Jerick Parrone at 7:33 pm

Jerick Parrone
20-something Filipino surviving in Europe's capital, Brussels. Striving to be a communications professional while at the same time, surviving the young, crazy and unpredictable expat life in Europe.